The Green Flower Foundation sends you her best wishes for the end of the year. 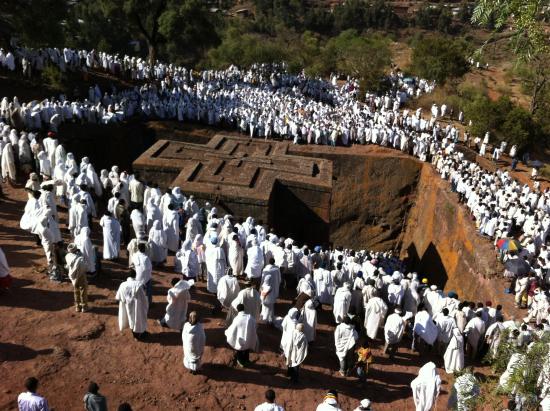 Known as Genna, Lidet or Kollé, Christmas in Ethiopia is completely different from Western Christmases. As the Ethiopians have kept the Julian calendar and have not adopted our tradition of celebrating Christ’s birth 25th  December. They celebrate Christmas instead of 7th  January according to the Gregorian calendar.

During the six days leading to Christmas, many Ethiopians go on the pilgrimage on the “historic road” to the holy region of Lalibela. Those who come to pray for the birth of Christ are greeted by the priests dressed in their white ceremonial garments. The ceremony is then carried out in the beautiful and spectacular churches of Lalibela, which date back to the 13th century.

Indeed, these churches are particularly spectacular because they were dug into the ground of volcanic rocks. The technique consisted of digging and sculpting the interior and exterior at the same time, evacuating the rubble through the windows.

It is around these churches that men and women sit separately. A choir sings as the churchgoers circle the church three times holding a candle in their hands.

It is also customary for Ethiopians to fast 55 days before Christmas, avoiding meat and alcohol.

On their return from the church, the Ethiopians organize a hearty meal, bringing together friends and relatives. The meal consists of Tiré Siga which is raw meat, cut into strips, dipped in a very spicy sauce (wat) which accompanies most Ethiopian dishes as well as sheep and poultry. The traditional Christmas meal also includes the injera, a pancake made with tef, an Ethiopian cereal.

Finally, they drink chai tea and tej, which is a fermented drink made of water and honey, and buna coffee, the grounds are used three times and it is customary to drink three cups.

Great strength emerges from this celebration that is a worthwhile experience, once at the very least.

Each of your donations allows us to continue this magnificent project that offers a real professional future to young Ethiopians.

Our dual-track training system is more adapted to professional life. We offer theory-based training, but also practical courses including internships and the development of entrepreneurial skills.

Thank you for your support and trust !